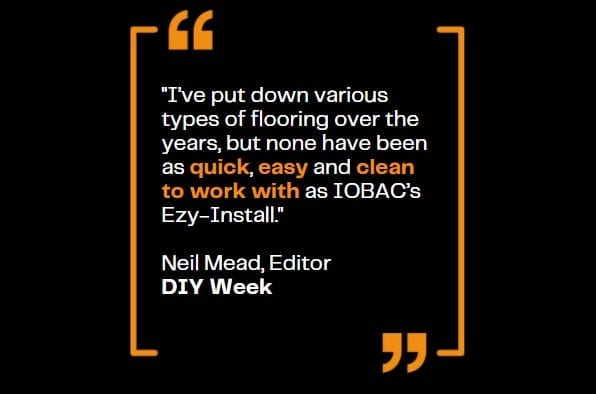 Many thanks to DIY Week , who put Ezy-Install Underlay through its paces in an independent product test recently. We are delighted to report it passed with flying colours!

Read the product review in full in this month’s edition here or in full below. 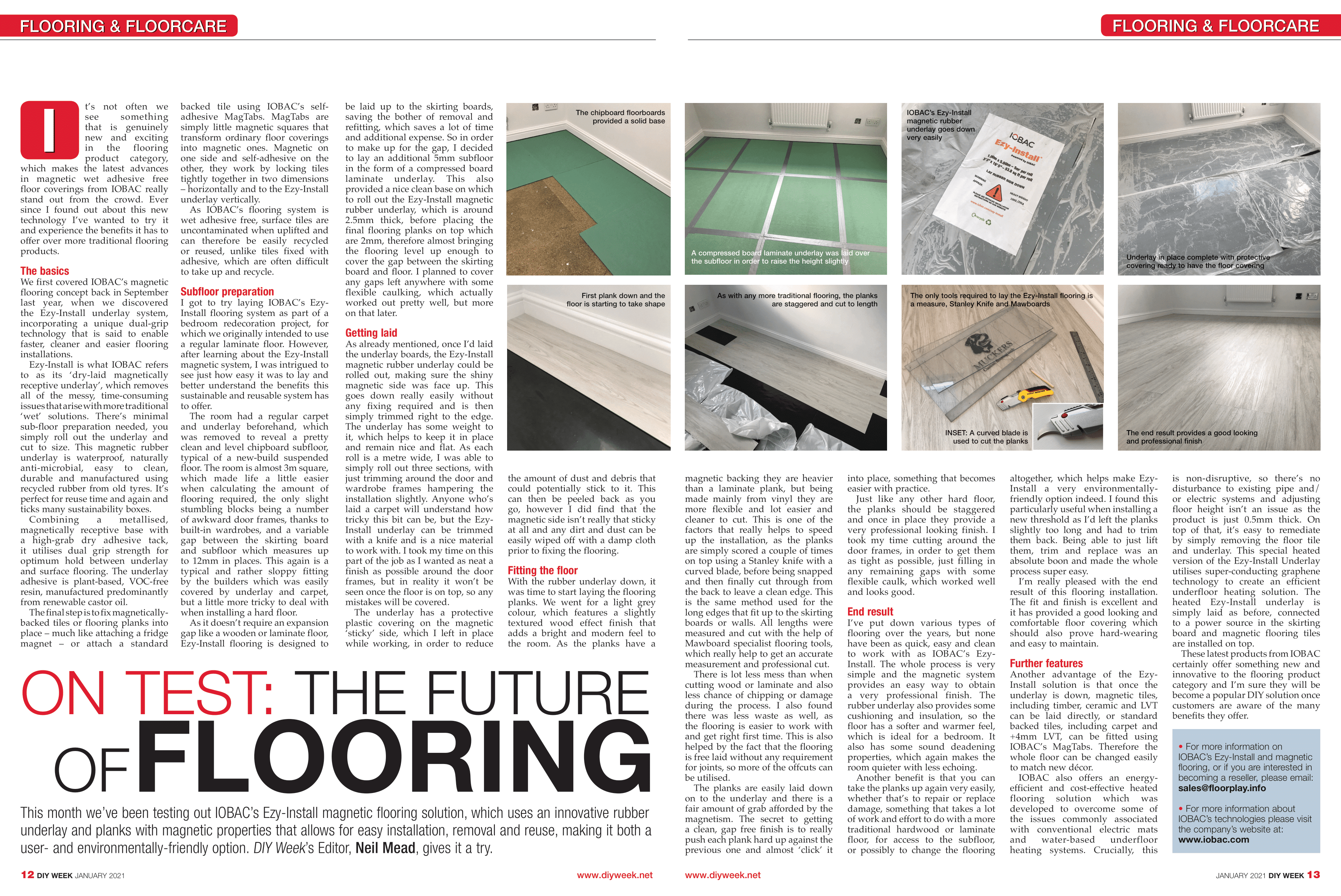 It’s not often we see something that is genuinely new and exciting in the flooring product category, which makes the latest advances in magnetic wet adhesive free floor coverings from IOBAC really stand out from the crowd. Ever since I found out about this new technology I’ve wanted to try it and experience the benefits it has to offer over more traditional flooring products.

We first covered IOBAC’s magnetic flooring concept back in September last year, when we discovered the Ezy-Install underlay system, incorporating a unique dual-grip technology that is said to enable faster, cleaner and easier flooring installations.

Ezy-Install is what IOBAC refers to as its ‘dry-laid magnetically receptive underlay’, which removes all of the messy, time-consuming issues that arise with more traditional ‘wet’ solutions. There’s minimal sub-floor preparation needed, you simply roll out the underlay and cut to size. This magnetic rubber underlay is waterproof, naturally anti-microbial, easy to clean, durable and manufactured using recycled rubber from old tyres. It’s perfect for reuse time and again and ticks many sustainability boxes.

The final step is to fix magnetically backed tiles or flooring planks into place – much like attaching a fridge magnet – or attach a standard backed tile using IOBAC’s self-adhesive MagTabs. MagTabs are simply little magnetic squares that transform ordinary floor coverings into magnetic ones. Magnetic on one side and self-adhesive on the other, they work by locking tiles tightly together in two dimensions – horizontally and to the Ezy-Install underlay vertically.

As IOBAC’s flooring system is wet adhesive free, surface tiles are uncontaminated when uplifted and can therefore be easily recycled or reused, unlike tiles fixed with adhesive, which are often difficult to take up and recycle.

I got to try laying IOBAC’s Ezy-Install flooring system as part of a bedroom redecoration project, for which we originally intended to use a regular laminate floor. However, after learning about the Ezy-Install magnetic system, I was intrigued to see just how easy it was to lay and better understand the benefits this sustainable and reusable system has to offer. 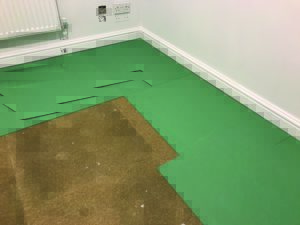 The chipboard floorboards provided a solid base

The room had a regular carpet and underlay beforehand, which was removed to reveal a pretty clean and level chipboard subfloor, typical of a new-build suspended floor. The room is almost 3m square, which made life a little easier when calculating the amount of flooring required, the only slight stumbling blocks being a number of awkward door frames, thanks to built-in wardrobes, and a variable gap between the skirting board and subfloor which measures up to 12mm in places. This again is a typical and rather sloppy fitting by the builders which was easily covered by underlay and carpet, but a little more tricky to deal with when installing a hard floor. 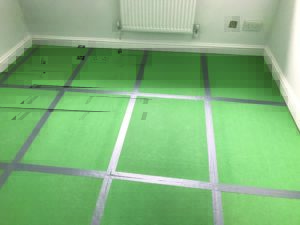 As it doesn’t require an expansion gap like a wooden or laminate floor, Ezy-Install flooring is designed to be laid up to the skirting boards, saving the bother of removal and refitting, which saves a lot of time and additional expense. So in order to make up for the gap, I decided to lay an additional 5mm subfloor in the form of a compressed board laminate underlay. This also provided a nice clean base on which to roll out the Ezy-Install magnetic rubber underlay, which is around 2.5mm thick, before placing the final flooring planks on top which are 2mm, therefore almost bringing the flooring level up enough to cover the gap between the skirting board and floor. I planned to cover any gaps left anywhere with some flexible caulking, which actually worked out pretty well, but more on that later. 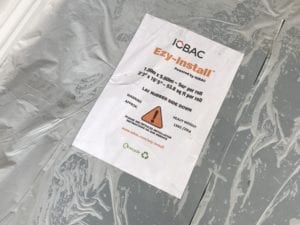 As already mentioned, once I’d laid the underlay boards, the Ezy-Install magnetic rubber underlay could be rolled out, making sure the shiny magnetic side was face up. This goes down really easily without any fixing required and is then simply trimmed right to the edge. The underlay has some weight to it, which helps to keep it in place and remain nice and flat. As each roll is a metre wide, I was able to simply roll out three sections, with just trimming around the door and wardrobe frames hampering the installation slightly. Anyone who’s laid a carpet will understand how tricky this bit can be, but the Ezy-Install underlay can be trimmed with a knife and is a nice material to work with. I took my time on this part of the job as I wanted as neat a finish as possible around the door frames, but in reality it won’t be seen once the floor is on top, so any mistakes will be covered. 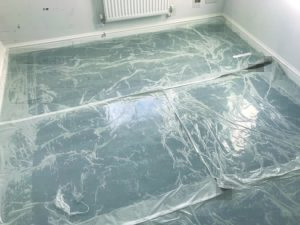 The underlay has a protective plastic covering on the magnetic ‘sticky’ side, which I left in place while working, in order to reduce the amount of dust and debris that could potentially stick to it. This can then be peeled back as you go, however I did find that the magnetic side isn’t really that sticky at all and any dirt and dust can be easily wiped off with a damp cloth prior to fixing the flooring.

With the rubber underlay down, it was time to start laying the flooring planks. We went for a light grey colour, which features a slightly textured wood effect finish that adds a bright and modern feel to the room (magnetic Luxury Vinyl Tile manufactured by Mabos). As the planks have a magnetic backing they are heavier than a laminate plank, but being made mainly from vinyl they are more flexible and lot easier and cleaner to cut. 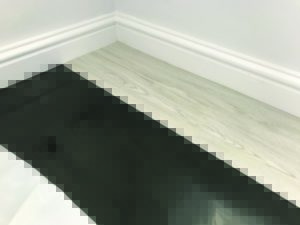 First plank down and the floor is starting to take shape

This is one of the factors that really helps to speed up the installation, as the planks are simply scored a couple of times on top using a Stanley knife with a curved blade, before being snapped and then finally cut through from the back to leave a clean edge. This is the same method used for the long edges that fit up to the skirting boards or walls. All lengths were measured and cut with the help of Mawboard specialist flooring tools, which really help to get an accurate measurement and professional cut. There is lot less mess than when cutting wood or laminate and also less chance of chipping or damage during the process. I also found there was less waste as well, as the flooring is easier to work with and get right first time. This is also helped by the fact that the flooring is free laid without any requirement for joints, so more of the offcuts can be utilised.

The planks are easily laid down on to the underlay and there is a fair amount of grab afforded by the magnetism. The secret to getting a clean, gap free finish is to really push each plank hard up against the previous one and almost ‘click’ it into place, something that becomes easier with practice.  Just like any other hard floor, the planks should be staggered and once in place they provide a very professional looking finish. I took my time cutting around the door frames, in order to get them as tight as possible, just filling in any remaining gaps with some flexible caulk, which worked well and looks good. 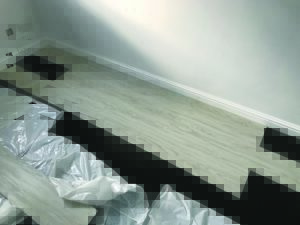 As with any more traditional flooring, the planks are staggered and cut to length 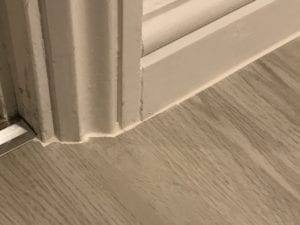 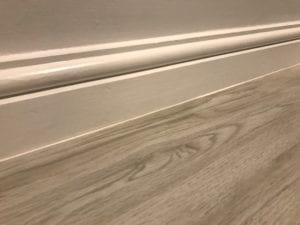 I’ve put down various types of flooring over the years, but none have been as quick, easy and clean to work with as IOBAC’s Ezy-Install.

The whole process is very simple and the magnetic system provides an easy way to obtain a very professional finish. The rubber underlay also provides some cushioning and insulation, so the floor has a softer and warmer feel, which is ideal for a bedroom. It also has some sound deadening properties, which again makes the room quieter with less echoing. 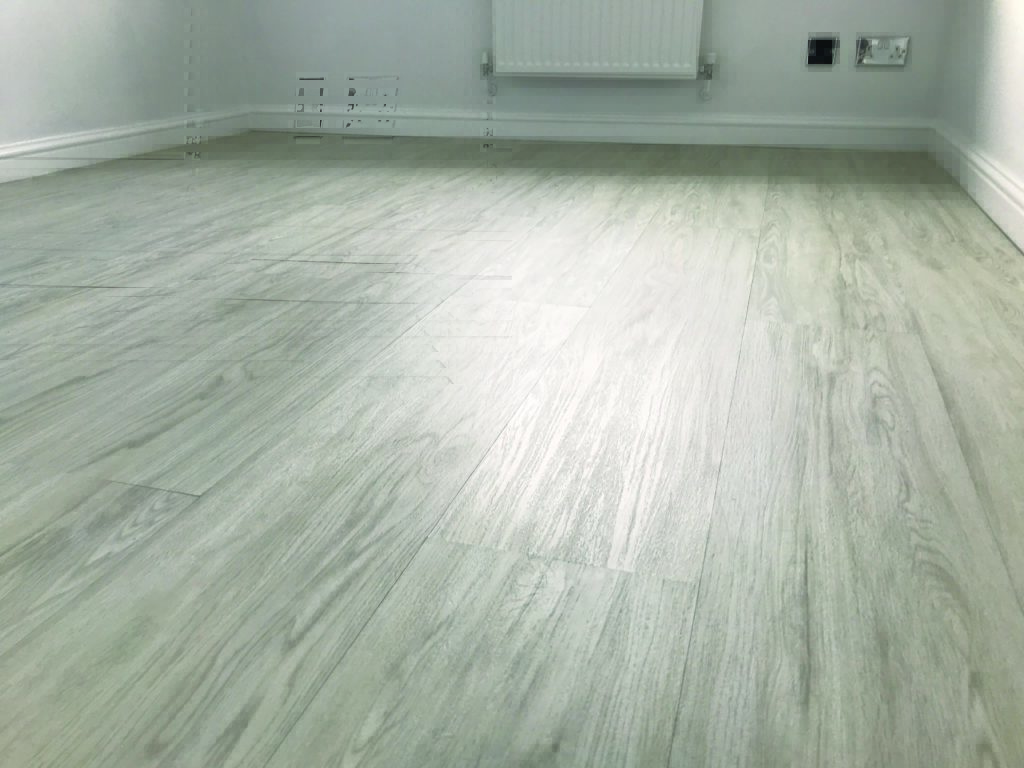 The end result provides a good looking and professional finish

Another benefit is that you can take the planks up again very easily, whether that’s to repair or replace damage, something that takes a lot of work and effort to do with a more traditional hardwood or laminate floor, for access to the subfloor, or possibly to change the flooring altogether, which helps make Ezy-Install a very environmentally friendly option indeed. I found this particularly useful when installing a new threshold as I’d left the planks slightly too long and had to trim them back. Being able to just lift them, trim and replace was an absolute boon and made the whole process super easy.

I’m really pleased with the end result of this flooring installation. The fit and finish is excellent and it has provided a good looking and comfortable floor covering which should also prove hard-wearing and easy to maintain.

Another advantage of the Ezy-Install solution is that once the underlay is down, magnetic tiles, including timber, ceramic and LVT can be laid directly, or standard backed tiles, including carpet and +4mm LVT, can be fitted using IOBAC’s MagTabs. Therefore the whole floor can be changed easily to match new décor.

IOBAC also offers an energy efficient and cost-effective heated flooring solution which was developed to overcome some of the issues commonly associated with conventional electric mats and water-based underfloor heating systems. Crucially, this is non-disruptive, so there’s no disturbance to existing pipe and/or electric systems and adjusting floor height isn’t an issue as the product is just 0.5mm thick. On top of that, it’s easy to remediate by simply removing the floor tile and underlay. This special heated version of the Ezy-Install Underlay utilises super-conducting graphene technology to create an efficient underfloor heating solution. The heated Ezy-Install underlay is simply laid as before, connected to a power source in the skirting board and magnetic flooring tiles are installed on top.

These latest products from IOBAC certainly offer something new and innovative to the flooring product category and I’m sure they will be become a popular DIY solution once customers are aware of the many benefits they offer.